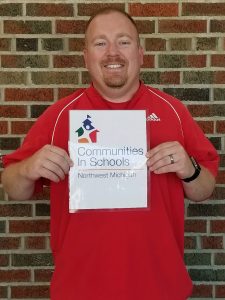 Nate Dzwik may be a Communities In Schools (CIS) of Northwest Michigan rookie but he’s a veteran at working with students.  Nate is the new CIS site coordinator at East Jordan Elementary School, a school system where he has worked for the past five years and been the varsity basketball coach for three years.  “I developed a ton of relationships in that time, that are now benefiting the students and CIS as we grow and build the program,” said Nate. “When I talk to the kids we talk about how my helping the students and their families also helps the school.”

Nate and his wife have been married 10 years and have four boys, ranging in age from seven to three months.  They met while both were attending Central Michigan University. She was working on a Special Education degree and got a job in northern Michigan. Nate worked for a landscaping company before landing a job in Special Education for the Char-Em ISD. He worked in middle school and high school classes for nine years. He’s now been at East Jordan for five years.

“As the new site coordinator I was privileged to get to start the program here,” he said. “We really try to push positive school behaviors and social, emotional learning which is truly helping to change the culture of the school.”

Nate said he and his family enjoy traveling around the state to see their families.  “I love being around and playing sports,” he said. “We also love to have family and friends over to our house. We grill food and play games in the winter and have bonfires in the summer. I love to play trivia as I am full of what my wife calls useless information.”