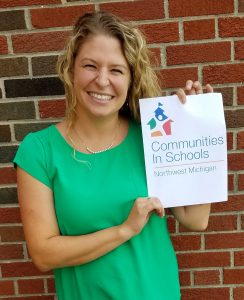 Keegan Shooks is “focused on behaviors.”   The CIS site coordinator at Central Lake Elementary School works with children in grades K-5 and believes her approach to “mindfulness” helps the social and emotional needs of her students.  “My approach is a little out of the box because we do things like yoga and meditation,” she said. “But the response has been phenomenal and the students and their parents can see the results.”  Keegan said the key is approaching each student’s situation with a “positive energy.” “CIS is making a big difference,” she said. “It is having a positive impact not only on kids but their families, too.”

Keegan grew up in Dearborn but moved to Central Lake when she was in high school because her folks bought the Lamplight Inn (“it’s 100 percent haunted,” she said), a landmark in town. “My folks always wanted to move up north to God’s country,” she said. “It happened sooner rather than later, but it worked out fine.”

She graduated from Central Lake, got her massage therapy degree from Lansing Community College then married R.J. Shooks.  R.J. is a fourth-generation farmer who has cattle and produces corn, cherries, soybeans and other crops.  “I’m a big believer in agriculture and nutrition, so this is perfect for me,” said Keegan.  The couple has four children – boys 11 and 5 and girls 9 and 7.

Keegan, who loves to travel and has been to Europe, admits she’s “a homebody.”  “I love to spend time with my family and be around our farm,” she said. “I also love going to the beach, especially Torch Lake.”  But she also loves her second job, as owner of Torch Lake Massage, where she can put her college degree to good use.  “I’m busy,” she admits, “but I feel like I’m making a difference, so I wouldn’t want it any other way.”