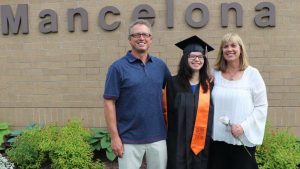 As CIS board chair, Deb Knudstrup has come full circle.   She grew up in Mancelona and graduated from Mancelona High School (MHS). Deb started college at Western Michigan but moved out west later with her husband Matt, also a Mancelona graduate.  She received her degree in Occupational Therapy from the University of Southern California.

Deb and Matt lived in California for 17 years before moving back to northern Michigan. But they still love to travel, especially to visit their sons who live on opposite coasts.  One is in Boston and their other son is in California. She and Matt have also been guardians to Christina for almost three years. Christina graduated from MHS in June.  “I love to travel,” said Deb, whose brothers and sisters also graduated from MHS. “But there is no better place than northern Michigan, especially during the summer.”

Deb joined the Communities In Schools (CIS) of Northwest Michigan board at the end of 2012. She was asked by former board member Beth McKaig, who was Deb’s eighth grade English teacher.   “She spoke highly of CIS, which I was fairly unfamiliar with at the time,” she said.  But Deb has made a big impact on CIS during her time on the board.  “What I like about CIS is that they help kids focus on learning and succeeding in school by removing some of the obstacles they might face,” she said. “Everyone needs a little help sometime and teachers have so many demands on their time and attention.  I like the way CIS site coordinators can help them out, too.”

In her spare time, Deb likes to take in concerts and theater performances.  “My dream is to be a backup singer and I’m practicing with our late night family jam band,” she said with a smile. “I can’t really sing but I’m working hard on the tambourine part!”